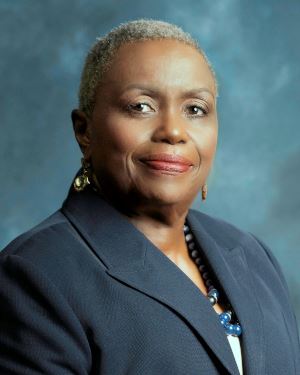 
Commissioner Beverly Joan Montgomery Williams first ran for elected office in November 2014. She received 50% of the vote in a four-person race for Seat 2 and was immediately voted as Vice Mayor by her colleagues at the organizational meeting. In 2018 Commissioner Williams was successfully reelected, receiving 73% of the votes, returning her to the Commission to continue serving the community that she truly loves. Because of her years of service and dedication to the City of Lauderdale Lakes, the State and Broward County recognize her love and commitment to the ‘’We Care City of Lauderdale Lakes”.

Commissioner Williams is the President of the Broward League of Cities. Her initiative - “Energize One Broward” - focuses on working with Broward municipalities and residents to tell the story of how local governments govern best. The intended/unintended consequences of preemptive legislation are often only known to local government. It is important that the constitutional power of Home Rule be defended and protected so that municipal governments can best serve their residents.

Commissioner Williams also represents the city on the Broward Metropolitan Planning Organization (MPO) Board and was appointed by Broward County Commissioner Dale VC Holness to the Broward Planning Council. She serves on the Broward Housing Authority as the representative of the Broward League of Cities. Commissioner Williams served as Chair of the Lauderdale Lakes Community Redevelopment Agency. She serves on the Mayors and Elected Officials Broward County Transportation Board and is active on the National League of Cities Board where she serves on the Human Development Policy Committee, and the Women in Municipal Government Board (WMIG). Commissioner Beverly Williams is the District 19 Leader for the National Black Council of Black Elected Officials (NBC-LEO), which covers the State of Florida.

Commissioner Williams attended and completed nursing school at the Washington Vocational School at the U.S. Naval Hospital in Pensacola, Florida. She was raised to understand how important it is to serve others. For many years she was Board President of the Irma H. Hunter Day Care Center in Fort Lauderdale, where she was instrumental in the organization and training of disadvantaged mothers enabling them to have daycare while receiving training to enter the workforce. She served as an advisor for “FOAM” - Females on a Mission - focusing on the education and prevention of teen pregnancy. She is a past member of 100 Black Women of Broward, the African American Research Library (AARLIC) of Fort Lauderdale and Past President of Friends of Lauderdale Lakes Library (5 years) and Eastgate Homeowners Association. She organized numerous “National Night Out against Crime” events in Lauderdale Lakes to educate the public on crime prevention. She was named to the Broward County Women’s Hall of Fame in 2002 and was honored by Alpha Kappa Alpha Sorority Incorporated, Zeta Rho Omega Chapter in 2010 with the Top Hat of Distinction Award. She is a committee member for the Democratic Party of Broward County; past board member of Florida Medical Center, member of Piney Grove First Baptist Church; past chair of Lauderdale Lakes Community Council, and a member of the Broward Sheriff Citizens on Patrol, (COPS).

Commissioner Williams is well known throughout her community for her energetic leadership and willingness to give back. Her passion is her love of gardening. She completed the Master Gardening Course at the University of Florida and is now a Certified Florida State Master Gardener. She is one of the organizers of the now renamed Frank Coleman Community Garden and the Children’s Community Garden. Commissioner Williams was instrumental in teaching 45 families and children how to grow fresh pesticide free vegetables and encouraging them to grow and eat foods never eaten before. She has been highlighted in the Miami Herald showing her home garden and the Sun Sentinel with the community garden.

Commissioner Williams has been married to former Lauderdale Lakes Commissioner Levoyd Williams for 54 years. She is the mother of two children, Antonia Jenae and Levoyd Keith, and grandmother of four: Jayden, Kiondra, Joshua and Nikolas.

Commissioner Williams’ favorite quote is by Dr. Martin Luther King, “Everybody can be great... because anybody can serve. You don’t have to have a college degree to serve, you don’t have to make your subject and verb agree. You only need a heart full of grace, a soul generated by love”.

Contact Commissioner Williams by email with questions and comments.