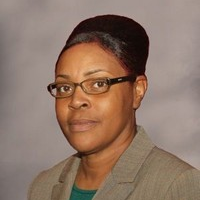 
Commissioner Gloria Lewis was first elected to the Lauderdale Lakes Commission in 2008 to a two year term and was re-elected in 2010 to a full four year term.

Commissioner Lewis is an educator with the Broward County School System. She is a dedicated educator at Oriole Elementary School in the City of Lauderdale Lakes.

Commission Lewis has a strong commitment to the Lauderdale Lakes community and promotes a “We Care” motto as a City Commissioner.

Her current and past community affiliations include: